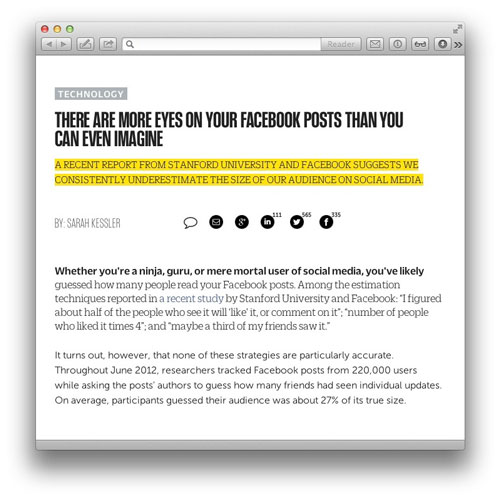 Fast Company is noting that a recent report from Stanford University and Facebook suggests we consistently underestimate the size of our audience on social media.  The article states that whether you're a ninja, guru, or mere mortal user of social media, you've likely guessed how many people read your Facebook posts. Among the estimation techniques reported in a recent study by Stanford University and Facebook: "I figured about half of the people who see it will ‘like' it, or comment on it"; "number of people who liked it times 4"; and "maybe a third of my friends saw it."

It turns out, however, that none of these strategies are particularly accurate. Throughout June 2012, researchers tracked Facebook posts from 220,000 users while asking the posts' authors to guess how many friends had seen individual updates. On average, participants guessed their audience was about 27% of its true size.

"For these posts without feedback," the study's authors offer as an explanation for users' consistent underestimation: "It might be more comfortable to believe that nobody saw it than to believe that many saw it but nobody liked it."